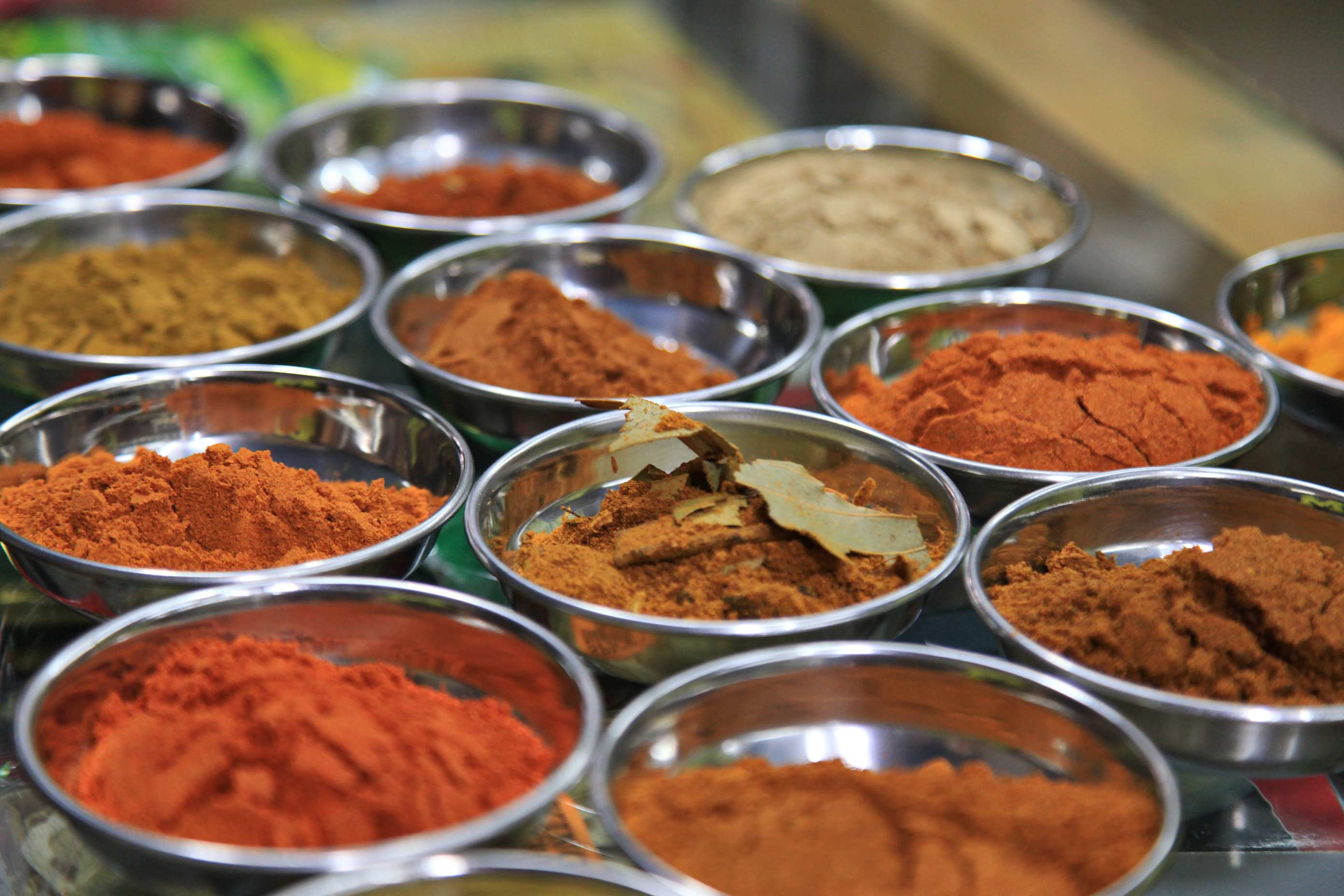 The Spices of Indian Food

After a scrumptious Dharavi Cooking Experience, getting hands on and learning how to make Indian dishes, we thought: why not pay homage to the ingredients that make the cuisine unique–a post in appreciation of some of India’s most beloved spices?

India boasts a diverse range of regional cuisines where varying spices and ingredients are used. Indeed, the basis of all dishes is the masala (which means “spice” in Hindi). The richness, the layers of bright, full-bodied and powerful flavours that a medley of spices brings is unbelievable. The ratio of each spice in a masala mix is tailored to one’s taste: it can be blended to evoke balance, or to enhance and emphasize particular flavours. Here are some essential spices found in Indian cuisine:

Turmeric is the spice that gives curry its characteristic yellow hue. It is loved for its potent antibacterial, anti-inflammatory and antioxidant properties.  The chemical compound cucurmin is present in turmeric, which lends this spice its medicinal powers. Studies have shown that curcumin can suppress inflammatory molecules and stimulates one’s antioxidant enzyme capacity. Many Indians swear by turmeric boiled in milk as a home remedy to fight colds and infections.

What really gives Indian dishes that “spicy” kick? None other than the chili pepper. Chilis are high in vitamins and minerals, particularly in vitamin A and C, immunity boosting nutrients. Also, capsaicin, an active compound of chili, is effective of relieving pain and congestion (that all too-familiar feeling of a runny nose after consuming a dish with chilis). Chilis are also known to have antibacterial and anti-fungal effects, good for ridding harmful bacteria in the stomach.

Cumin, a spice native to Egypt, is one of the world’s most loved spices. It’s a spice that is versatile and can be used in various kinds of dishes, with its peppery, nutty  flavour. Rich in iron and fiber, cumin boasts a myriad of health properties–particularly in reducing inflammation and gas as well as aiding digestion. Here in India, jal jeera (cumin water) is commonly consumed to promote digestion; simply boil cumin seeds, let the mixture cool, and drink on an empty stomach first thing in the morning.

The peppercorn: a familiar spice that is used not only Indian cuisine but also in Asian and Continental cuisine. In fact, records show that the peppercorn has been used in Indian cuisine since 2000 BCE. Peppercorn contains piperine, a chemical property which is known for its anti-inflammatory and antioxidant effects.

This flavourful spice is known for its antioxidant and antibacterial properties, being used in various forms of ancient medicine. It is filled with nutrients, aiding digestion and reducing inflammation. (In fact, my mother swears by cloves as a means of curing tooth infections.) Did you know that cloves were transported in the 13 and 14th century to China, India and many more places? It’s no surprise that the spice is a culinary basis in Indian cuisine.

Ah, there is nothing quite like the aroma of cinnamon. Its use can be raced back to ancient Egypt, and its medicinal properties have been valued for centuries. What’s at the heart of the health benefits and soothing scent of cinnamon? Cinnamaldehyde: an active compound that is responsible for cinnamon’s potent health benefits. This particular compound has antibacterial and anti-inflammatory properties. Cinnamon is also believed to aid in controlling sugar levels by reducing one’s resistance to insulin (a hormone integral to regulating blood sugar as well as energy levels and metabolism)

Not many people know what mace is: mace is a spice derived from the outer coat of a seed of nutmeg. It’s a flavour that can been described as a mixture of pepper and cinnamon–more aromatic than nutmeg itself. Records indicate that mace had been used by the Romance in the 1rst century A.D. It was so valuable that in the 14th century, half a kilogram of nutmeg was worth as much as 1 cow or 3 sheep!

A particularly fragrant spice, bay leaf hails from the Mediterranean and is known for its distinctive aroma. The Greeks and Romans used bay leafs to crown accomplished and revered individuals. Besides flavouring stews, curries and more, bay leaf is also commonly used in cosmetics, soaps, and medicine. Its numerous health benefits include aiding digestion, reducing swelling, and fighting fungal infections to name a few.

Ground coriander is included in many Indian spice mixes for its distinct flavour. Coriander has also been touted by various cultures over the centuries for promoting digestion. It is known to have diuretic properties, alleviating gas and promoting smooth digestion. Did you also know that coriander was believed to prevent food poisoning? In fact, coriander seed oil has antimicrobal and antibacterial effects.

Has all this spice talk inspired you to use a few (or all) in your next meal? Get hands on and learn more about how to use them in classic Indian dishes on our Dharavi Cooking Experience!