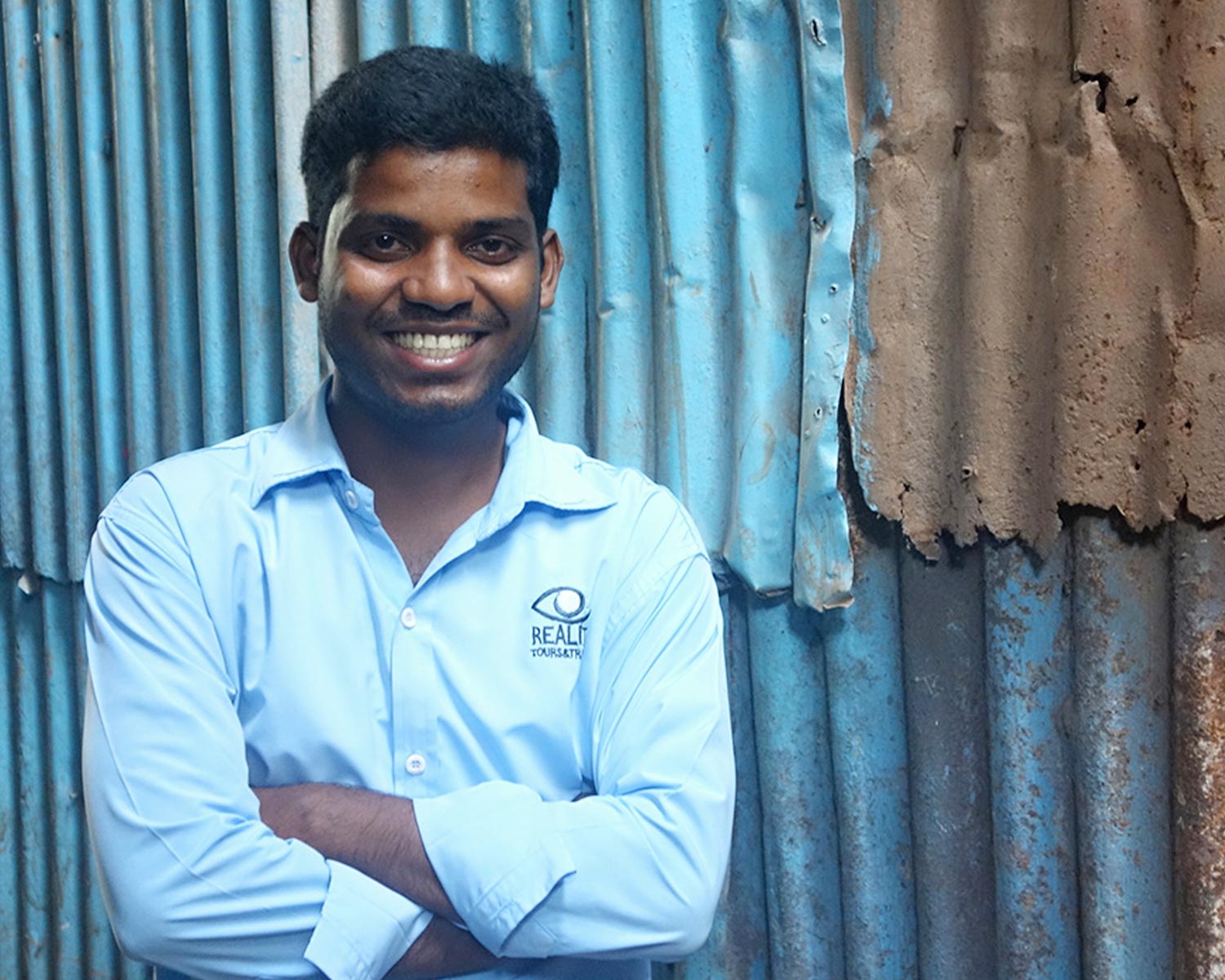 My name is Balaji and I am 27 years old. I live in Dharavi and have worked as a tour guide at Reality Tours and Travel for over 5 years now.  As a local from the slum, I have a lot to say about my neighbourhood –  the way it has changed with time and the changes that have happened to me in this time too by learning new skills in my job.

END_OF_DOCUMENT_TOKEN_TO_BE_REPLACED

My name is Manoj Ramesh Medwal and I was born and brought up in Mumbai. My parents both come from Delhi and I have one elder brother and one younger one. We live together with my mum. My elder brother is married and has two wonderful children. I’m really proud to be a nice uncle. We live in Mahalaxmi, an area in the South of Mumbai, not too far from Dhobi Ghat, the famous open-air laundry place of the city. This is my story… END_OF_DOCUMENT_TOKEN_TO_BE_REPLACED

What Would The Neighbours Say? A Study Into Community Perceptions Of Slum Tours In Dharavi

Slum tourism has become extremely popular in the 21st century, especially in Mumbai. With its escalating use, throughout media and existing scholarship slum tourism has generated a heated and critical debate especially concerning ethics and its so-called ‘voyeuristic’ nature. However, scholarly research on slum tourism remains limited and fragmented.

Reality Tours & Travel began, first and foremost, to serve the Dharavi Community. To bring people here to challenge the negative stereotypes they held about ‘slums’ and sensitise them to the multilayered, multifaceted cultures, communities and lives being played out in ‘Asia’s largest slum’. To turn the profits we made from taking these tours into tangible, positive change through our sister-NGO, Reality Gives. END_OF_DOCUMENT_TOKEN_TO_BE_REPLACED

Five TED Talks We Love, And Why We Love Them

Since 1984 ‘Technology, Entertainment, Design’ (more commonly known the world over as ‘TED’) have been sharing ‘ideas worth spreading’ relating to all things, from education to business, science to development. In the last 30 years, they’ve shared over 2,400 talks in more than 100 languages which have been viewed 500 million times.

These talks are a regular source of ideas, information and inspiration here in the Reality Group office – here are a few we love, and why we love them. END_OF_DOCUMENT_TOKEN_TO_BE_REPLACED

What I Learned From Two Years in Dharavi: Reflections From Our Former Marketing Director, Nick

For the past two years, I have had the privilege of working in Dharavi: the heart of Mumbai, its center of small scale enterprise, and “one of the largest ‘slums’ in Asia”. Dharavi is an incredibly unique area that outsiders rarely get the opportunity to work in and learn from for such an extended period of time. It is an organically built neighborhood comprised of over 80 different communities that was born out of necessity and now houses up to one million people (who speak over 30 languages and follow six religions) and 15,000 small scale industries. END_OF_DOCUMENT_TOKEN_TO_BE_REPLACED

Your average Mumbaikar might wonder why Dharavi, one of Asia’s largest slums, has survived, slap bang in the middle of India’s burgeoning financial capital, for so long. As the city has grown and expanded, Dharavi has come to occupy a prime piece of real estate. Why not bulldoze it down and start again?

What people across Mumbai might not know is the way that the slum is influencing their lives; how the million people and over ten thousand businesses Dharavi is home to are a vital part of the Maximum City, rather than a blight upon it. END_OF_DOCUMENT_TOKEN_TO_BE_REPLACED

From Dharavi To Smokey Mountain: What It Takes To Run A Responsible Tour Company

Chris Way, co-founder of Reality Tours, takes us through his work with Smokey Tours in Manila and compares it with the challenges he faced in Dharavi.

I have been acting as a Consultant for Smokey Tours since March 2013, when I visited Manila for the first time. Juliette Kwee, from the Netherlands, who was working as a missionary for a Manila based NGO working in the slums, saw the potential of providing slum tours in the area. The benefits that she saw were the obvious ones- employment opportunities for the tour leaders, tour receipts being used directly to help the people in the area, but also, she wanted to be a connecting agent between visitors wanting to help out and organisations doing work in the slums. END_OF_DOCUMENT_TOKEN_TO_BE_REPLACED

My Experience In Dharavi

Chris, a university student from the United States, shares with us what he took away from his visit to Dharavi.

This past May, I made my first trip to India. My mother and I have been traveling internationally every summer for the last several years, but had only recently set our sights on the second-most populous country on Earth. Having stayed mostly within Europe on prior trips, we were looking for something a little farther out of our comfort zone, something more exotic. We were feeling adventurous, and India was more than up to the challenge.

END_OF_DOCUMENT_TOKEN_TO_BE_REPLACED

The Danger Of A Single Story: Why Dharavi’s Other Story Needs To Be Told